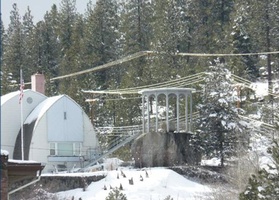 This historic site is now a Truckee Recreation and Park District facility with meeting rooms and an indoor basketball court.

This site where C.F. McGlashan (publisher of Truckee's first newspaper and author of ''The History of the Donner Party'') built a museum in the late 1800s, features The Rocking Stone, a sacred site of the early Washoe, and the Veterans Hall domed structure which is now used as a Truckee Donner Recreation and Park facility.

The Rocking Stone is located right next to the Veterans Hall Building. It is a natural formation, so named because the stone rocked back and forth with minimal hand pressure. Although it no longer rocks, it is one of many known rocking stones in the world. Local legend holds that it had been used by Native Americans to dry meats in a place inaccessible to animals.