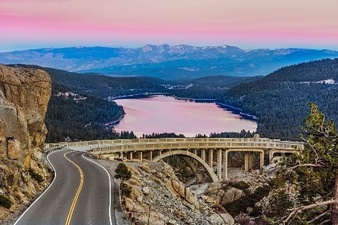 Before Rainbow Bridge was built, the old Lincoln or Victory
Highway wound steeply down Donner Summit with grades as
high as 18%. With the 1920's, automobiles became a popular
mode of transportation. They had improved mechanically and people began vacationing with their cars sometimes pulling trailers. Trucks had also improved and become a common form of long haul transportation for goods. More vehicles were using the Lincoln Highway as well, so people were thinking about improvement.

As a result, in 1924-25 the Rainbow Bridge was built to connect the Lake Tahoe and Donner Summit areas with Lincoln Highway, largely to facilitate logging and tourism.