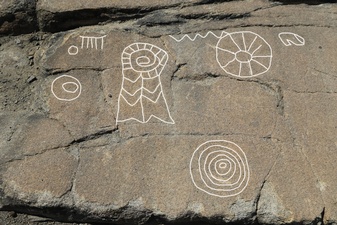 Native Americans left us a record of their presence in the Donner Summit area: petroglyphs. Similar symbols are found in many places in the northern Sierra Nevada, usually on gently sloping granite slabs.

The most accessible prehistoric rock art site is below Donner Pass on Old Hwy 40 between Rainbow Bridge and the Chinese Wall. Look on the flat granite bench just west of the road near the historical marker. This is an extensive petroglyph site that contains over 200 rock art elements, including a bear track. The petroglyphs here are hard to see but fascinating.

Archeologists estimate that the petroglyphs in this area were made 1500 to 4000 years ago. They were created by pecking through the surface of the glaciated bedrock using a tool called a hammerstone. Most are geometric shapes ? wavy lines, circles, and zigzags. Human and animal forms, such as stick figures and deer or bear tracks, are less common. Although no one knows what the petroglyphs mean, many people believe they have a spiritual or ceremonial significance.